HWKN designs for MINI’s creative use of Space 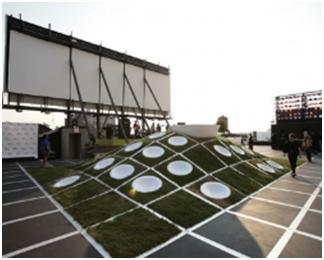 Due to constraints of space, people have become more conscious to utilize the land area with beautiful and distinctive designs. The designs which should cover the land and also exhibit the natural art and pleasing to the eyes of people are highly preferred.

Such designs are not limited to small space of land and also can be applied on large areas. A stunning example of such land design we have seen recently is work done on a 1000 sq. foot roof in New York by a creative artist naming HWKN, as a part of BMW MINI’s create use of space project architecture. HWKN has successfully incorporated the popular MINI vehicles parts of BMW, turning the rooftop into a green organic place and looking an organic hill with more pleasing to the visitors.

There are different natural and artificial elements used to make the roof protective and a green factor. An abstract architectural grid houses the organic hill that is filled like white seating dimples. Its performance stage located at top of the hill structure will create an ambience between members, e.g. audience and entertainers.

During At night time, the green carpet lights up using the LEDS and space turns into a scene of club. Along with a billboard, a speaker’s platform is set and lighting tower casts colored lights in to space. The entire set up is converted from a dull space into a compact entertainment zone, complete with all the facilities one would expect from a large-scale event space.

There are several other creations by this design form to setup and change the elements of this design as you want to view the space and your rooftop structure. HWKN has been involved in a number of projects besides designing architectural elements for the Creative Use of Space project. For the Volkswagen Blue Motion Campaign, HWKN came up with a breathable piece of architecture. 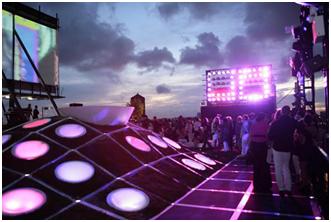 Reminiscent of a bellows, the structure has a roof that goes up and down to cool the space inside. It uses no other technological infrastructure though the articulated façade emphasizes the breathable feature of the structure. The kiosk can glow in the dark and invites visitors to step in for a bit of exploration. Eco roofs or green roofing is one of the attractive and right decisions made by many building owners, because various environmental benefits are received due to eco green roofing. This green roofing with colored lights will be best to give your roof a new look.