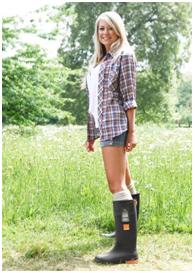 Not content with developing an augmented reality iPhone app for Glastonbury, Orange has also been developing a rather low tech prototype – a mobile phone charging device for your Glasto willies.

At first I thought this was an April Fool. But seemingly not, given we are half way through June. Billed as perfect for this weekend’s Glastonbury festival (handy given your mobile phone normally runs out of charge after a few hours of texting/phoning your mates to find out where they are) it apparently works by converting the heat from your feet into electric current.

Twelve hours of stomping through the mud will give about 1 hour of charge (not much really), but you can increase it by dancing around because the hotter your feet get the more energy you produce.

Developed in conjunction with Got Wind, the Power Wellies are unfortunately still in prototype form. But you can recharge your devices (mobile phones, even laptops) in the Orange Chill ‘n’ Charge area. For more information go to www.orange.co.uk/glastonbury

There is a video featuring the orange power Wellies and how they work, though after watching it one would not clear if even it works or not, but sure it will be helpful if a constant amount of required energy has been provided with its use and one can really charge the mobile phone.

The Orange Power Wellies, created in collaboration with renewable energy experts Got Wind, use a unique ‘power generating sole’ that converts heat from your feet into an electrical current. This ‘welectricity’ can then be used to re-charge your mobile phone. Orange, Official Communications Partner for the Glastonbury Festival, will be showcasing the Orange Power Wellies prototype onsite.

Twelve hours of stomping through the Glastonbury Festival in your Orange Power Wellies will give you enough power to charge a mobile phone for one hour. To increase the length of time you can charge your phone for, simply hot step it to the dance tent because the hotter your feet get, the more energy you produce. 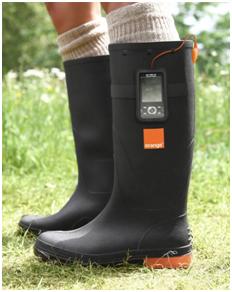 How it works. After a full days festival frolics you can plug your phone into the power output at the top of the welly and use the energy that has been generated throughout the day to charge your phone. The power collected in the ‘power generating sole’ is collected via a process known as the ‘Seebeck’ effect. Inside the power generating sole there are thermoelectric modules constructed of pairs of p-type and n-type semiconductor materials forming a thermocouple.