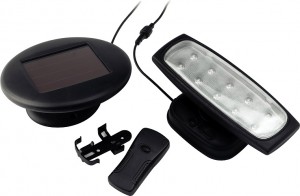 Most solar powered security lights automatically switch on when motion is detected, however, the Solar Mate Point 5 is a little different in that it is switched on and off via a keyfob remote control. The battery is charged up via the solar panel during the day, and a fully charged battery gives you around 3 hours of continuous light.

The light has a total of 10 bright LEDs and an internal battery pack of 3 AA rechargeable batteries. The LEDs are bright enough to cover a 7 square metre area with light. The solar lamp is connected to the solar panel via a 1.7 metre wire, which allows the solar panel to be placed for optimal sunlight.