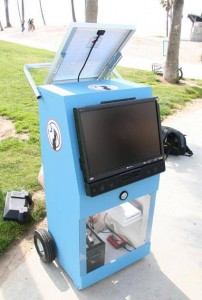 The team over at Tom's Hardware Guide have had a flash of inspiration and created a new eco gadget, a solar powered Wii gamestation. Using a high-def screen, a Wii, solar panel, inverter and heavy duty battery, they've created a slightly odd looking portable and green entertainment device. The whole system gives them an estimated 8 hours of playing time, however, the charging time via solar panel is a little longer than that.

The Wii is a great games console as you have no controller wires to mess about with. If you're playing games that need lots of space, then you could just wheel the system out into the garden! The whole system cost $1,431.17, with the monitor being the most expensive part of it all at $679.99. Neat idea though.