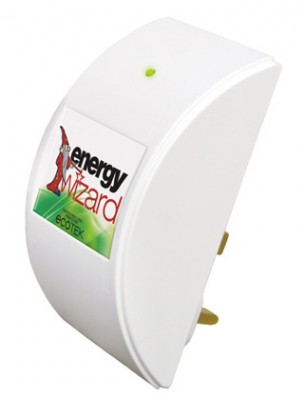 The Energy Wizard is a device that plugs into a standard UK 3 pin plug socket to help reduce the amount of electricity being used. By implementing techniques of filtration and correction to your electrical supply, the device helps to improve your household appliances' efficiency.

The Energy Wizard made by Eco Tek works by optimizing the voltage and current demands. All electricity we use comes in the form of both alternating current (AC) and voltage. The Alternating current behaves as its name dictates, it alternates, fluctuating rapidly between high and low amounts many times in a second. For electricity to be used efficiently the rises and falls of both the current and the voltage should coincide, as they drift apart in timing the supply becomes less efficient, causing appliances to require more electricity than they would if the peaks and valleys were together.

Some household appliances actually contribute to the current and voltage peaks and valleys losing synchronization. The Energy Wizard helps to manipulate the supply to get both current and voltage peaks and falls to happen in unison. This leads to more efficient electrical usage for a household, which will help to lower the amount of electricity being consumed and so reduce electricity bills. To work, the Energy Wizard needs to be plugged into a plug socket and left there. While it is in a plug socket and working, a LED indicator light will be on. As most households have at least one socket that is never used, it should be fairly simple to place the device somewhere it can be left plugged in.

As the change in the current and voltage is down to the influence of appliances, and the interference they cause differs from appliance to appliance, the saving a household can make by using an Energy Wizard can differ greatly. Though this device can sound a little like ‘snake oil’, the product has been tested to show its effectiveness. During independent testing on the device savings of up to 23% were made on some appliances, and the average saving was found to be around 12.5% on the total consumption of appliances tested. The Energy Wizard is guaranteed to reduce your electrical usage by up to 10%.