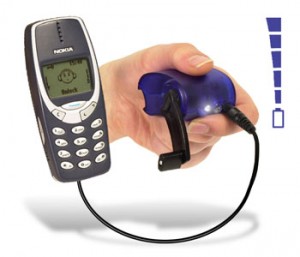 The Hand-powered Windup Mobile Phone Charger is a perfect and affordable little gadget that allows you to top up your mobile phone using nothing but hand power. We’ve seen hand-powered chargers before, but this one stands out as it’s so cheap at just £5.99 (around $10) and it supports a number of mobile phones (sadly not the iPhone though).

The phone charger is really light and compact and is able to give you 8 minutes of talk time with just 3.5 minutes of hand power (where you average at around two and a half turns per second). Counter-intuitively, it’s not the speed of cranking that determines how much talk time you get, but more the number of turns that you do. This is because the energy generated by a dynamo is directly proportional to the number of turns completed, rather than the speed of the magnet moving within the coil. However, the faster you go, the less time it will take to charge your phone!

The compatibility list includes (which is sadly a little short):

For just £5.99, it’s a pretty neat gadget. However, I’m sure the lack of compatibility for the newest mobile phones will put people off.