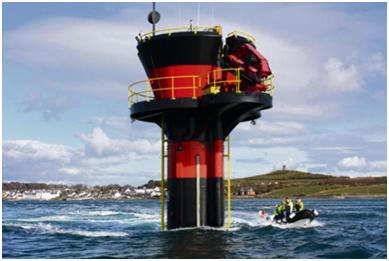 Wind and solar power energy resources can be used effectively with some major resources like nuclear energy or electricity produced form petroleum to fulfill the increasing energy demands of the world.  These can be used as alternative resources, because there is no surety that sun will glow brightly each day to produce optimum amount of energy or wind will blow fast to run the wind energy generation system.

Most of the people are aware about underwater wind turbines or what we usually understand them as tidal turbines, in which rotors are propelled by tidal current instead of using the wind.

At East River in New York, There is going to be similar big experiment of this new concept of generating power with tidal energy as renewable energy resource. The diameter of this rotor is 16-feet and it is capable of delivering power to a supermarket and a parking garage.

Its turbines have been designed in a shape that look like wind bladed turbines and diameter of each turbine ranging from 15 feet to 60 feet. Such turbine structure was established in New York last year in December and five more such turbines will installed till the May.

There is need for change because we are continuously using the non-renewable resources of generating heat energy and now it is time to look for new ways that should affect our environment positively and generate continuous supply of electric energy to fulfill the increasing energy demand. The ERAU researcher’s underwater turbine is the newest of the prevalent turbines that is mainly based on the concept of synchronous movement of turbines just like a cluster of fish to trap underwater currents. These turbines will be interlinked by sensors. 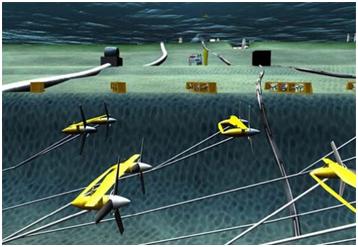 The Oceans are major resource to produce limited amount of energy. And for this, a new technology is being worked upon that will cultivate itself on the Gulf Stream currents thereby meeting up with the energy demand of entire Florida. Well, for this they are working hard to design the Florida Atlantic University’s underwater ocean turbines. Installing these turbines takes a lot of time and a lot of foolproof research. This is one of the major hurdles facing them. On the other hand, the marine ecosystem may be hampered due to these underground ocean turbines.

The underwater turbine will be placed where Gulf steam current pass through at Coast of Florida. The underwater equipment will be attached with cables to transfer the energy generated, because Gulf steam has millions liter of water which is flowering per minute and large amount of electric energy will be generated with this method.

Scientists Focus Towards Plants To Generate Electricity
Algae- The Next Generation Fuel
Alternate Energy Source – Hydrogen
Why Nuclear Energy Will Lose its Ground Against Other Renewable Sources??
Ambient Power From Surrounding