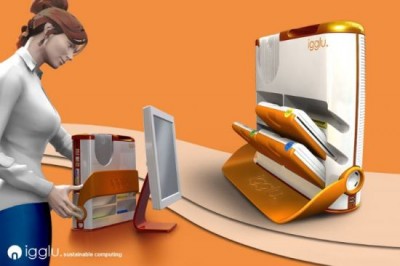 The Igglu Modular PC is a concept to allow anyone to upgrade their computer systems easily. By using color-coded slots and easy to install blocks for the parts, the concept hopes to make upgrading a computer something anyone can do without needing any additional assistance. 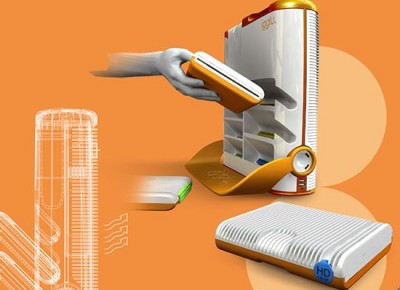 The Igglu Modular PC is the concept of UK designer Rob Mansfield, it consists of a single tower that has color-coded compartments designed to take trappable modules that are color-coded to match. These module blocks allow you to easily update the main parts of your PC, there is a color-coded slot for a hard drive, optical drives, a graphic card, PCI drives, and RAM. The aim is to allow anyone to upgrade their PC without any of the hassles normally associated with doing so, to hopefully reduce the number of PCs that are just replaced after a few years.

Computing equipment is always advancing, every month it seems there are faster parts, higher amounts of memory, smaller sizes, increased efficiency. This leads to many computers becoming obsolete in only a couple of years. Upgrading a computer can be done, but many find the process difficult, not knowing what kind of hard drive they can use, what kind of memory, how much RAM their motherboard supports, or even how to install the parts they have purchased.

The Igglu hopes to change all that. Parts would be sold in color-coded blocks, each block easily pushed into its matching color-coded slot. There would be no need to take a computer apart or touch any of it internally (helping to prevent accidental damage) all parts sold in the blocks would work with the system, so no confusion over what you would need to buy. The concept even seems to suggest purchasing the parts through an online account, which would hopefully track what parts you currently have to ensure you are upgrading each one. The blocks that are returned would potentially be reused as a budget range or recycled. This would help PCs be available to all, and reduce the amount of computing equipment that requires disposal.

The main tower has been designed to help it run using the least amount of electricity possible. The tower would be fan-less, the design of it offering passive cooling to the components. This allows it to operate quietly, without the noise of the fan constantly turning, and use less electricity than a standard fan-cooled system.

The only concern would be the eventual need to upgrade the tower part, as in the concept that seems to house the processor and of course the motherboard. Given the concept ideals, it would seem that this, like the parts, would then be either be returned to be used second hand or recycled, with an updated model sent out for your current parts to be slotted into.