Night Storage Heaters have been a part of modern life for so long that they are generally just accepted as being the most efficient way to heat a home. This is largely due to the convenience they offer, which has led to consumers neglecting the potential of an alternative.

However, 21st-century technology has evolved to such an extent that not only are modern electric radiator systems reaching new heights of technical superiority, but they are also now so eco-friendly that we all have a duty to embrace them and take advantage of the environmental benefits they offer to contemporary homes and businesses.

Old fashioned storage heaters have been proven to harm the environment by releasing trace elements of carbon, which when combined with the hundreds of thousands of storage heaters being used on a daily basis around the world poses a genuine environmental issue that can not continue to be ignored and is being addressed by many organisations

There is also a real threat to human health due to this carbon emission as the dry burning heat that storage heaters produce has the potential to cause inflammation of the lungs; an ailment that is more likely to affect children and asthma sufferers.

Modern electric radiators are able to avoid this carbon release thanks to several technological developments such as Magmatic Heat Retention (MHR) technology. 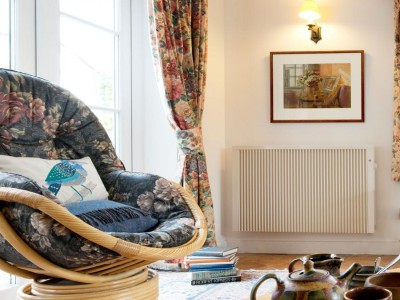 MHR acts as an updated environmentally friendly version of storage heater technology by using small tablets to retain heat while the radiator is switched on, with the capability of releasing this heat gradually later once the system is no longer connected to the mains, only modern radiators consume just a third of the energy needed by those older models.

MHR tablets are so advanced that they also work much faster than old storage heaters, being able to generate heat from the coldest temperature settings to the very hottest in less than half an hour.

MFD works by using a series of small fins located inside the radiator that will evenly circulate heat around a room for greater comfort and faster heating times, using less energy and lowering electricity costs in the process

Another good reason for homes and businesses to embrace modern radiator designs is the trendy designs they boast. Modern radiator appearances are able to match the style of any modern décor thanks to having a sleek design that fits appropriately into a room without distracting from its surroundings. This is a look far removed from the unflattering appearance of old storage heaters.

West Country Heating offers a number of sophisticated modern electric radiators ideal for use in all homes and businesses. Contact them today to learn more.

Envirogadget is a destination to find eco-friendly gadgets and technologies. Environment encloses and balances the ecosystem that further lays the foundation to prevail happy lives. So, We guide you in picking sustainable products and step towards a clean environment.