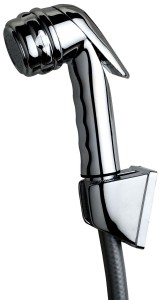 A bidet is a bathroom device that is used to clean yourself once you’ve just been to the loo. Bidets are not particularly common in some parts of Europe and North America, although they are commonly found in Southern Europe, some Latin American countries, as well as some African and Asian countries. Essentially its about using water to clean yourself rather than using toilet paper. You then dry yourself using paper toils, or even better, a towel.

I must admit, being a Brit, I’m not very keen on the idea. As barbaric as it sounds, toilet paper seems to be a much better idea to me. However, if you consider how many trees are used to create toilet rolls worldwide, any saving would be better for the environment. Just imagine how much energy is used to treat sewage to turn it into safe drinking water, where toilet paper is a significant part of that sewage. Again, less toilet paper means less energy is needed to treat water in the first place. Of course, using less toilet paper will also help you save money, and everything counts in these tough economic times.

The Bathroom Bidet Sprayer is a handheld shower-like device that can be used as a bidet in your home without the need for a plumber. The sprayer is connected to the cold water pipe on your toilet cistern, meaning you don’t need a full bidet suite to benefit from the bidet. In fact, the Hand Bidet Sprayer people claim it has better water flow and control than a standard bidet provides.

The sprayer is made from high-quality anti-bacterial plastic to reduce the chances of spreading nasty bacteria. The manufacturers also say there are health benefits from using a bidet too!

For those of you who are curious to try a bidet, the Bathroom Bidet Sprayer comes in models priced from $34.95 to $42.95.