The Eco bulb is an energy-saving idea by Seokjae Rhee. The concept bulb takes advantage of the eco-friendly credentials of LED bulbs. Working with remote control the bulb uses these LEDs to produce a light source that is directional. 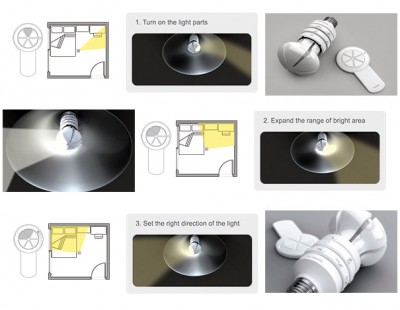 The Eco bulb concept is that when lighting a room a lot of light is often not needed, only sections of a room are usually ever requiring lighting at any time. The bulb uses LEDs (Light Emitting Diodes) in a 6 compartmental bulb design. The bulb has 6 distinct and separate areas to it which can be controlled with the Ecobulb’s remote control to turn any of these sections on or control the brightness of a section.

LED bulbs have many advantages over the more commonly used energy-saving bulb the CFL ( Compact Fluorescent Light/lamp). The life span of a LED bulb is longer than that of a CFL. CFLs also cause a problem when it comes to disposing of them due to them containing mercury (though this is a trace amount). The LED bulb does not have any such issues while working with approximately the same energy efficiency. The LED bulbs should also turn on straight away without the warm-up time that CFLs need.

The Ecobulbs concept then also contributes to less electricity usage as only sections of the light are used at once. There is no light wastage, no light being used to illuminate areas of a room not in use. This, coupled with the brightness control, means that the one light bulb can then take the place of many different light functions, from a small pool of soft light like that of a lamp to a brightly lit room all at the push of a button. One problem may be finding the button to do this, especially if there is a frequent need to change the sections of light as remote controls do often go missing.