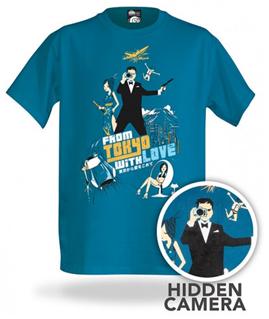 You may have reviewed many of the spy gadgets in a television advertisement and one such device is currently in many ads for pen cameras. Spy gadgets which are currently in the market have two major features; they have hidden feature to spy and ready to capture photos with video or sound recording. As compared to large video cameras which were used before for taking the special moments in the camera memory, nowadays spy gadgets are more advanced and have powerful spying features.

If you are looking for the best spying camera featured tool, the electronic spy camera t-shirt is the only such newly made t-shirt that is impossible to detect. When you see this shirt, it may look like an ordinary design t-shirt with small patterns designed on it. That’s of course right, but you may not experience a hidden camera that will detect with its powerful photos capturing system.

You are no longer required to use a tie pin or tie for a detective camera to hide beside it, or broaching up for ladies for your hidden camera to spy. Now go in Bond 007 with a causal style t-shirt. This camera has neither the outer surface outside the t-shirt nor it has the wider screen or size to be found hidden in the shirt. This is not only the spying or important information which needs to be captured with this camera, but there are also beautiful moments around us which need to be captured and we must have all the times our gadgets charged for them. The only problem suffered from nowadays gadgets is their battery charging, although a major improvement has been made with solar battery charging and use of extended chargers. But things are not still completely solved, we need all the technology features to be added in one model with design, capturing of audio and video, memory card for video storage, and some best camera pixels.

This is a weird remote control with feedback through the vibration that goes in your pocket to capture the photos, with its 640 * 480 resolution. This camera can go to 150 color digital photos and you can remove the electronic part of the t-shirt while washing it. The images are captured with the best quality and resolution of our choice. To view the photos saved, simply plug it in the computer through its USB port and view or download. This cool gadget will cost you only $39.99 to purchase from ThinkGeek.com